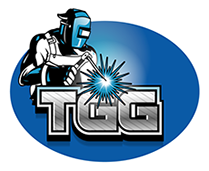 Helium (He) is a colorless, odorless, non-toxic, non-corrosive and nonflammable gas. it is the second lightest element next to hydrogen.  Helium is an inert gas and does not react with other compounds or elements. Due to its high thermal conductivity and high ionization potential, helium is used as a shielding gas for welding applications when increased heat input is desired, and low tolerance for oxidizing elements exist such as with aluminum, stainless steel, copper,  and magnesium alloys.  the addition of helium generally increases weld pool fluidity and travel speed.  If you put helium in a balloon and let go of the balloon, the balloon rises until it pops. When it pops, the helium that escapes has no reason to stop -- it just keeps going and leaks out into space.  Therefore, in the atmosphere there is very little helium at any given time.  Helium is cryogenically distilled out of natural gas to produce the helium we put in balloons.

The primary source of helium is from natural gas wells. It is obtained by a liquefaction and stripping operation.  Due to the world shortage in helium, many applications have recovery systems to reclaim the helium.

Helium is inert and the least soluble of all gases in liquids and is therefore used as a pressuriSation gas for:

Helium is used extensively in the welding industry as an inert shielding gas for arc welding. Helium is used in welding because of its inert properties at arc temperatures.  It is an ideal gas for use with materials such as aluminum, stainless steel, copper and magnesium alloys due to is high heat conductivity.  It is also used in

conjunction with helium (“leak”) detectors to test the integrity of fabricated components and systems.

and therefore high pressures. The use of helium to dilute the oxygen instead of nitrogen, as in air, prevents nitrogen being dissolved in the blood, which is the cause of nitrogen narcosis (also known as “bends”).

Since Helium is the second lightest gas on the periodic table, and non flammable, it is perfect to use in balloons to give them the ability to float in the air.  We can handle all different demand levels.  We carry the Balloon time helium tanks that are perfect for any small event and we also carry the large industrial cylinders for users with a higher demand.  Click on the link below to learn more about the balloon time helium.

Due to nonflammability and low density, this gas is ideal for filling toy balloons (in mixtures with nitrogen), airplane tyres, advertising blimps, geostationary balloons (certain projects are under way for the realisation of balloons designed to serve as television transmission and observation relays).

Helium mixtures with hydrocarbons are used in flushing Geiger counters used for the detection of 〈α, β, γ and

Helium is used as a carrier gas or as a purge gas for a variety of semiconductor processes.

Helium is used as a calibration and balance gas in calibration mixtures, a carrier gas in gas chromatography

and purge and zero (span) gas for analytical instruments.

Liquid helium is used to cool the superconductive magnets in NMR (Nuclear Magnetic Resonance) for analytical or medical purposes and in the R&D to study processes around absolute Zero.